Brigadier General Obinna Godwin Onubogu was born in Surulere, Lagos State. He hails from Anambra State. The senior officer attended Yewande Memorial School Lagos, Airforce Primary School Kano, and the Nigerian Military School Zaria and obtained the West African School Certificate with Distinction grade in 1987.  He is a graduate of the Nigerian Defence Academy, and a member of 41 Regular Course. He was commissioned into the Nigerian Army as a Second Lieutenant on 17 September 1994. The senior officer is of the Infantry Corps.

The senior officer holds a Bachelor of Science (Honours) in Physics from the Nigerian Defence Academy, a Post Graduate Diploma in Remote Sensing and Geographic Information Systems from African Centre for Space Science Technology Education (in English) in Obafemi Awolowo University Ile-Ife, another Post Graduate Diploma in Peace and Reconciliation Studies from Coventry University United Kingdom and a Masters in Security and Strategic Studies from the Post Graduate School of the Nigerian Defence Academy. He has also obtained certifications in several fields of endeavour including a Certificate from the Harvard Kennedy School, Boston USA having attended the Senior Executive in National and International Security 2017, among others.

Brigadier General Obinna Onubogu has garnered immense peacekeeping experience while serving in a number of peacekeeping missions in Liberia, Sierra Leone, DR Congo, and Guinea Bissau. He was a contingent member of the ECOWAS Monitoring Group (ECOMOG) between 1996 and 1999 and served in both Liberia and Sierra Leone. He returned to Sierra Leone in Year 2001 and served under the United Nations Mission in Sierra Leone (UNAMSIL). Subsequently, he served as a Military Observer (MILOB) under the auspices of the United Nations Mission in DR Congo (MONUC) from 2005 to 2006 and served as a Deputy Force Commander at the ECOWAS Mission in Guinea Bissau (ECOMIB) from 2012 – 2014.

The senior officer has served in several military units and establishments in various staff, instructional and operational capacities and held various appointments. He was at various times a Platoon Commander, Adjutant and Company Commander whilst at 26 Battalion. He also served as Staff Officer Grade 2 (Operations) at Headquarters 81 Division, Staff Officer Grade 2 at the Department of Military Secretary (Army), Assistant Director Peacekeeping Operations at the Department of Training and Operations (Army), Nigerian Contingent Commander and Deputy Force Commander of the ECOWAS Mission in Guinea Bissau, as well as Deputy Director for Counter Terrorism and Counter Insurgency Operations at the Nigerian Army Training Centre (NATRAC). The senior officer also served as Deputy Chief of Staff (Administration) at Headquarters 1 Division as well as Deputy Director (Plans) at the Department of Policy and Plans (Army). He also commanded 16 Brigade Yenagoa. Obinna contributed immensely to counter terrorism/insurgency operations in North-East Nigeria, under Operation LAFIYA DOLE as Commander 25 Brigade Damboa and Commander 29 Task Force Brigade Jakana.

Brigadier General Obinna Onubogu is currently the College’s Director of Higher Management Organization and Operations. In this capacity, he supports the policy and academic directives of the Commandant NDC and the Deputy Commandant/Director of Studies. He also provides strategic level direction to directing staff and participants particularly at the start of each course. He is responsible for conducting one of the final strategic national exercises for participants on the course. The exercises are intended to serve as capstone packages that test participants’ assimilation of the entire course package.

Obinna is a member of several professional bodies some of which are Society for Conservation-GIS and the Nigeria Institute of Management. He is happily married and blessed with 4 children. He loves reading, jogging, photography, playing lawn tennis, playing scrabble/chess, watching football and outdoor adventure/travelling. 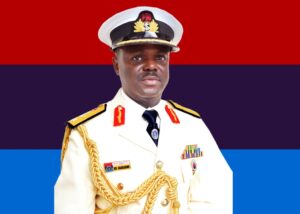 Cdre Vincent Burabari Gbaranwi was born on 3 July 1972 at Bori, Rivers State, Nigeria. He joined the Nigerian Defence Academy (NDA) Kaduna in August 1991 as a member of the 43 Regular Course and was Commissioned into the Nigerian Navy (NN) in 1996 as a sub-lieutenant.

He has attended all courses and relevant training for elevation to the rank of a Commodore in the NN. Some of these include the Junior and Senior Staff courses, at the Armed Forces Command and Staff College (AFCSC), Nigeria, the Sub-Technical and Officers Long Courses at the Nigerian Navy Ship (NNS) QUORRA, Lagos – Nigeria. Other key courses attended are the United Nations Military Observer (UNMO) Course, Nairobi, Kenya, the Officers Intelligence Information and Analysis Course, Islamabad, Pakistan, the International Anti-Terrorism/Anti-Piracy Officers Course, Pensacola, United States and Non-International Armed Conflict Course, at the International Institute of Humanitarian Law, San Remo, Italy. He also attended the National Defence College (NDC), Nigeria.

The senior officer has served in several capacities on board some NN Ships such as ENYIMRI, AYAM, AMBE, SIRI, ZARIA, OBULA and Commanding Officer NNS KYANWA. Similarly, he served at the defunct Sea Training Command, (now the Naval Doctrine Command), Naval Ordnance Depot, NNS PATHFINDER and BEECROFT as well as the Headquarters, Naval Training Command, Lagos. He was a Directing Staff at the AFCSC and Deputy Defence Attache, Embassy of Nigeria, Paris – France and Assistant Director, Policy and Plans at the Naval Headquarters, Abuja.

The senior officer’s decorations include the United Nations Mission in Sudan and Economic Community of West African States Monitoring Group medals, among others. He is a member of some professional bodies, and earned the psc+ award, as well as a Distinguished Fellow of the National Defence College (fdc+), Nigeria. He is currently a Director Curriculum and Programmes Development at the National Defence College, Nigeria.

He is married and blessed with 3 children. His interests include geostrategic affairs and sports.

Air Cdre Saeed Abdullahi Madaki was born in Niger State, he had his primary Education at Model Primary School Suleja. He attended the Nigerian Navy Secondary School, Navy Town Lagos. He was admitted to the NDA in August 1992, as a member of 44RC. He graduated from the NDA with a Bachelor’s Degree in Political Science and Defence Studies, he also backed a Master Degree in International Affairs and Defence Studies from the same institution.

In the Course of his career, the senior officer has held the following appointments; Admin Officer at HQ DAI NAF, Group Intelligence Officer at 81 Air Maritime Group, 88 Military Airlift Group and the 435 Base Services Group, Ikeja. Air Cdre Madaki was the Chief Instructor Strategies Studies at the Defence Intelligence College from July 2009 – Jun 2011, he was also Chief Instructor at the Ground Training Group Kaduna from Jun 2011 – Jun 2012 and Directing Staff at the Armed Forces Command and Staff College from Feb 2014 – Mar 2016 and was also the Dy Director Training HQ DIA. Other appointments held are; Comdt Nigerian Air Force School of Air Intelligence, Makurdi, Comd 119 Composite Group Sokoto and Dy Director, Directorate of Air Intelligence, HQ NAF. The senior officer speaks French and German Languages in addition to 3 Nigerian Languages. Before his current posting, he was the Dy Director Attaché Management, DFL (DIA).

Air Cdre Madaki is married and the union is blessed with children. 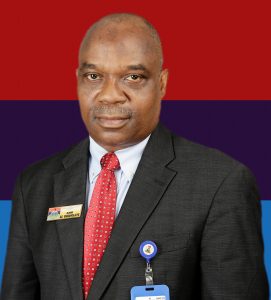 He attended the Ministry’s one-year Foreign Service Academy in Lagos in 1984 and came top of his class. Thereafter, he obtained a Masters’ degree in International Law and Diplomacy (MILD) from the University of Lagos with Distinction in November 1992. Prior to this, he attended the University of Oxford, England for a postgraduate course in Diplomatic Studies from October 1990 -June 1991 and passed with Distinction.

In his diplomatic career, Ambassador Sola Enikanolaiye served in various capacities at home and abroad, including as a Special Assistant to the Special Adviser to President Olusegun Obasanjo on International Relations at the State House from November 1999 to April 200 I. While at Headquarters, he served as an active member of various top management and policy making Committees and bodies, especially in his capacity as Assistant Director, Deputy Director and Director in the Office of the Honourable Minister of Foreign Affairs where he served four Honourable Ministers.

Abroad, Ambassador Enikanolaiye served in many of Nigeria’s diplomatic missions abroad notably Addis Ababa (Ethiopia), Belgrade, (Serbia), Ottawa, (Canada), London (UK) and lastly as Nigeria’s Head of Mission in New Delhi (India). He was also member of the Nigerian delegations to several Summits and International Conferences of the ECOWAS, the OAU/AU, Commonwealth and the United Nations, among others.

He has contributed significantly to the development and articulation of Nigeria’s foreign policy and diplomatic practice with emphasis on institutional development, security, development and peacekeeping matters, including the transformation of the Organisation of African Unity to the African Union, the evolution of the New Partnership for Africa’s Development (NEPAD) and the African Peer Review Mechanism (APRNI) as well as on regional integration, among others.

He was appointed Permanent Secretary, Ministry of Foreign Affairs effective 5th August 2016 from where retired on 4th August 2017 after 35 years of active, meritorious and unblemished service. In the course of his career, Ambassador Enikanolaiye visited over fifty (50) countries in different parts of the world.

He is currently on contract appointment as the Director, National Geopolitical Affairs at the National Defence College, Abuja, Nigeria.

He is married to Mrs Adunni ENlKANOLAlYE (Nee Olorunnishola) and blessed with three girls, a boy and three grandchildren.

Commodore Aniefiok Cletus Uko was admitted into the Nigerian Defence Academy (NDA) as a member of 43 RC on 16 August 1991. He bagged a bachelor’s degree in Chemistry in 1995 and was subsequently commissioned Sub Lieutenant on 21 September 1996 as a seaman officer into the Nigerian Navy. The senior officer has attended several military and civil courses. Among the courses attended include the Sub Lieutenant Technical Course and Officers’ Long Course at NNS QUORRA, Apapa where he specialized in Navigation and Direction. Other military courses are the Junior and Senior Staff Courses at the Armed Forces Command and Staff College (AFCSC), Jaji. The senior officer also attended the International Maritime Officers’ Course at the United States Coastguard Training Center, Yorktown, Virginia, United States of America. Cdre Uko is a holder of a master’s degree in International Affairs and Defence Studies and Master of Philosophy in Security and Strategic Studies.

The senior officer has served in various capacities and held numerous appointments both afloat and ashore in the Nigerian Navy as well as tri-Service institutions.  He was a Naval Assistant to the Commandant, National Defence College, Abuja, Navigating Officer, Instructor Nigerian Navy Basic Training School, Onne as well as instructor at the Navigation and Direction School, NNS QUORRA, Apapa. Others include Navigating Officer NNS NWAMBA, Executive Officer of FOB IGBOKODA and NNS BURUTU, Assistant Director Transformation at the Naval Headquarters and Commanding Officer FOB ESCRAVOS and NNS UNITY. He was also a Directing Staff and Chief Instructor at the AFCSC, Jaji as well as a Directing Staff at the Naval War College Nigeria.

Cdre Uko enjoys reading, travelling, swimming and watching football.  He is happily married and the union is blessed with 4 beautiful girls. 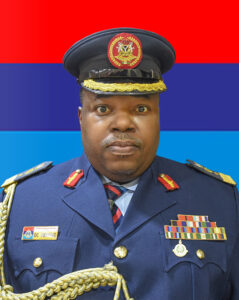 Air Cdre Osichinaka Chiedu Ubadike is an Aircraft Engineer by specialization. He obtained a Bachelor of Engineering Degree in Electrical and Electronics Engineering with First Class honors from the Nigerian Defence Academy (NDA). He also holds a Master of Science in Electrical/Electronics Engineering as well as Master in International Affairs and Diplomacy all from the Ahmadu Bello University Zaira.  He further holds a Master of Philosophy in Defence and Strategic Studies from the NDA.

Air Cdre Ubadike holds a Master of Science and Doctor of Philosophy in Aerospace Engineering from Cranfield University United Kingdom. The Senior officer attended Command and Staff College Jaji in 2010 and the National Defence College Abuja in 2018. Air Cdre Ubadike was a Dean at both the School of Post Graduate Studies and Faculty of Air Engineering, Air Force Institute of Technology Kaduna. Other appointments held by the Senior Officer include Commander Central Avionics Overhaul Centre, Director of Aerospace Research at the Air Force Research and Development Centre and Nigerian Air Force Chief Research Officer. He is currently the Director of Information and Communication Technology at the NDC. 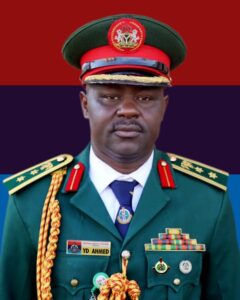 Col Yusha’u Dogara Ahmed was born on 28 Dec 71 in Kaduna. He had his secondary school education at MFCT Secondary School, Rubochi Abuja. Dogara was admitted into NDA on 4 Jan 97 as a member of Direct Regular Course 9. He was commissioned on 5th Jul 97 as a Lieutenant into the Nigerian Army Education Corps.