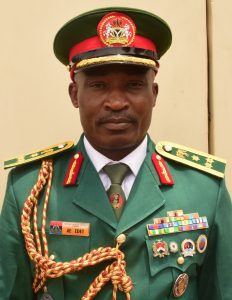 Brig Gen Aniedi Effiong Edet was commissioned into the Nigerian Army Electrical and Mechanical Engineers Corps in September 1995. He holds a Bachelor of Engineering degree in Electrical/Electronics Engineering from the Nigerian Defence Academy Kaduna (1995); Masters in International Affairs and Diplomacy, Ahmadu Bello University, Zaria (2002); Masters in Governance and Leadership, Ghana Institute for Management and Public Administration, Accra Ghana (2013); and Masters of Science in National Security Strategy from the US National Defense University (2017).

He has held several command, staff and instructional appointments within and outside Nigeria. He was a comparative member of the Directing Staff at the Ghana Armed Forces Command and Staff College, Accra (2011-2013). He was also a Chief Instructor at the Armed Forces Command and Staff College, Jaji (2015-2016). He served in the Office of the Nigerian Army Operations Monitoring Team as Deputy Director Logistics/Campaign Studies and Analysis and participated in ECOWAS Regional Force and many United Nations missions such as ECOMIL (Liberia, 2003), UNMIL (Liberia, 2003-2004), UNMIS (Sudan, 2007) and UNAMID JOC (Darfur, 2007-2008).