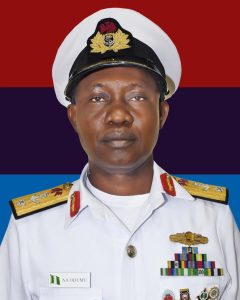 Commodore Abdul Adamu Odumu was born on 5 Jan 65 in Ogwule Village in Agatu LGA of Benue State. He had his primary school education in same village before proceeding to Government Secondary School Otukpo for his secondary education from 1978 to 1983. He joined the Nigerian Navy (NN) as a member of the 6th Regular Course at the Naval College ONURA, Onne from 1985 to 1987 and was commissioned into the NN on 8 Jul 89.

On graduation from NDC in 2014, he was appointed Comd Forward Operating Base (FOB) Ibaka before he was appointed to NHQ as DD Training in 2015. Others are Dy Superintendent Naval Ordnance Depot Lagos from 2016-2017, DD Admin Defence Intelligence Agency from 2017-2018, DD Transformation at DHQ in 2018 and Director Special Projects at NHQ from 2018-2020 and Director Standard at NHQ from 2020-2021 before his current appointment as Director of Admin at NDC WEF 15 March 2021.