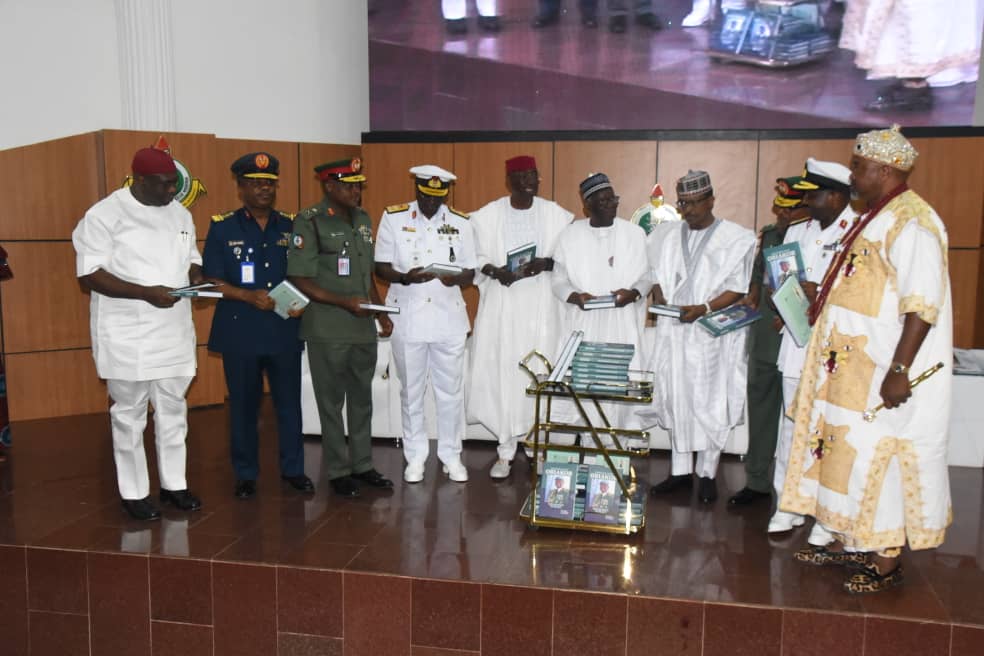 He said the Center had in 2017 conceived the idea of a strategic leadership study series to facilitate the module and in keeping with its academic and research support role to the College. The idea, according to him, was one of the key lines of effort in the Center’s Work Plan 2018 – 2020, which was approved by the College Board in December 2017.

The Commandant said the series was conceived to produce biographies, memoirs and monographs that documents the professional experiences of selected, serving or retired military and civilian personalities in strategic leadership positions in Nigeria with a view to drawing lessons for posterity. The aim, he said, was to promote values of strategic leadership garnered from the lives and careers of strategic leaders to commemorate the 60th anniversary of Nigeria’s participation in international peacekeeping and peace support operations, which began in 1960.

According to him, the first 2 publications focus on 2 very senior retired Nigerian Army Officers like Task Order 001 was on Gen Martin Luther Agwai, and today the College is launching the Biography of Lt Gen Chikadibia Obiakor. “It is pertinent to say that Gen Agwai became the first Commander of the Hybrid United Nations African Union Mission in Darfur while Lt Gen Obiakor served as the first Commander of the United Nations Mission in Liberia.

“The book, “Rough road to Peace ” is the second publication in the series that chronicles the life and career of retired senior Nigerian Army Officers. “Lt Gen Obiakor had a distinguished career in the Nigerian Army where he rose to the top hierarchy and also played prominent roles at the international scene. He served as Deputy Force Commander and Force Commander in various peacekeeping missions in Africa and was the first Nigerian to occupy and perform in the substance of military adviser at the United Nations. “I, therefore, want to thank the General for accepting to share his vision, experiences and lessons that lends credence to a comprehensive biographical exploration of the NDC’s theme of strategic leadership which made it possible for this book launch today,” he said.

Rear Admiral Bashir commended the efforts of the authors and research team that worked for the successful completion of the book. He said that work was currently ongoing on the third biography in the series, which he said should be ready for public presentation by the first quarter of 2023. He thanked President Mohammadu Buhari for his encouragement and support to the College. Speaking on the book, the Chief of Staff to the President, Prof. Ibrahim Gambari, said the book was worthy of reading, adding that road to peace was often difficult and also long.

Prof Gambari said the book could not have been compiled by any other institution than NDC with local and international reputation. He commended the giant strides of the College in authoring and publishing the second book in the College’s Leadership Biography Series to document for posterity, the defining moments in the life and times of Gen Obiakor. According to him, the book is what the younger generation could read to learn from their experiences and their contributions. “This is indeed a tradition that must be inculcated as the institution continues to grow and to expand and to make its impact. “There is nothing that enriches the quality of collection such as experience and knowledge sharing and exchange. “Lt Gen Obiakor is a fine officer and a gentleman”.

He said he was yet to do his autobiography to reveal some certain things that people needed to know about him and use. “As an academic environment, you need such things about people who have some ideas, who have done certain things for other people to take a look at them and apply them,” he said.

The event in pictures....