The NDC has conferred 102 Participants of NDC Course 30 with the Prestigious Fellow of the National Defence College Honour. Speaking at the 30 Years Anniversary Celebration and Graduation Ceremony of NDC Course 30, the Special Guest of Honour (SGOH) President Muhammadu Buhari GCFR who was represented by the Secretary to the Government of the Federation, Mr Boss Mustapha said the College was established 30 years ago with the mandate to train selected senior military officers from the armed forces, paramilitary, ministries departments and agencies (MDAs) including friendly nations. President Buhari commended the nation’s apex defence institution for its continuous effort towards raising a discipline and professional strategic leaders for the armed forces, security agencies as well as MDAs. 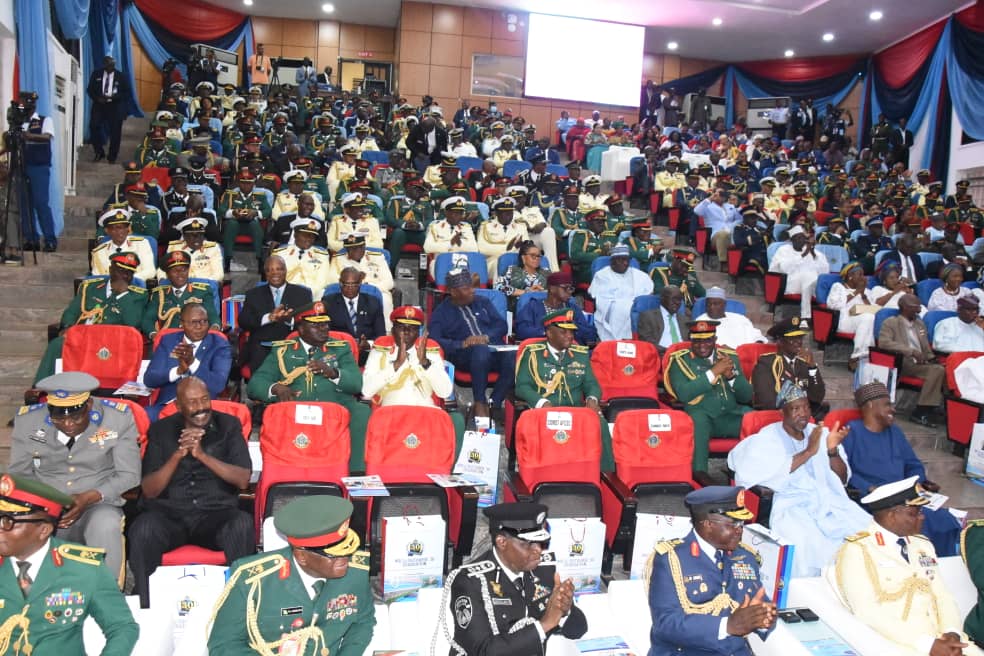 He said the college had since its establishment 30 years ago, continued to fulfil its mandate and had grown to be at par with similar colleges across the world. He charged the Participants to deploy the knowledge they had acquired in making useful suggestions toward addressing the challenges in their areas of responsibilities. The president assured that the government would remain committed providing needed resources for the security agencies to carry out their assigned tasks.

He said the college had trained the finest from the military, security agencies and MDAs both from within and outside the country since inception in 1992, adding that some had distinguished themselves in their careers.

According to him, the mission of NDC is to develop future strategic leaders who are sufficiently equipped with knowledge and skills. “for participants of course 30, this mission was achieved through the pathway of study in 9 modules comprising research methodology, strategic writing, Statecraft and social political environments, economy and finance, science and technology, international affairs and regional studies. “Others are policy strategy and national security, military history and conflict studies, others are; peace supports  operations and higher defence management. “The module were delivered in form of lectures, seminars, study tours, research papers and studies under a broad theme, ” A Whole of Society Approach to Enhancing Human Security in Nigeria.”

“The course also involved exercises that stimulated real life scenarios and the review of the National Defence and Security Policies,”  I” am proud to say that many of the alumni of this college have become pacesetters in their various fields of endeavor and have projected the image of the College in good light. No doubt, the College has made its mark in the political terrain of not just Nigeria but the West African Sub-region and beyond. In addition, through its Centre for Strategic Research and Studies (CSRS), the NDC has creatively engaged the international community especially in the domain of peace support operations being the ECOWAS Centre of Excellence in Peace Support Operations at the strategic level.” Said the Commandant of the College.

A foreign participant, Commodore Ashwsni Tikoo of Indian Navy, thanked Nigerian government and the armed forces for giving them the opportunity to be a part of the course and learning experience of a lifetime. Tikoo said the course had also afforded him the opportunity to make new friends that would help shape his military career.

The Graduation Ceremony in pictures....